World War I and II Activity

Harry Munson and Virgil Mischke, both of Red Wing, Minnesota, are the most recent in a long line of local business entrepreneurs who maintain a continuing interest in the story of one of Minnesota’s earliest, significant manufacturing enterprises, the boat and motor business in Red Wing, Minnesota. The original enterprise began in 1902 and went through a series of phases in ownership and management until 1979. Products that were made in Red Wing were sold world-wide.

Virgil Mischke now owns the remaining assets, drawings and other technical material related to the manufacture and distribution of Red Wing Motor Company boats and motors produced until 1979. Harry Munson has been interested in refurbishing models of the major types of Red Wing motors to an operational level. He displays the motors on three trailers at various public events and shows. To date, all but two model types have been located. In addition, Harry and Virgil have collected an impressive number of documents and photographs that reflect the history of the company and its products. This overview, beginning with the Red Wing Boat Manufacturing Company, is the result of their wish to “one day write a book” based on the interesting material they now possess and to share the information with anyone interested in the history of boats and motors.

Their book is based on records and documents owned by the authors and on interviews conducted by editor David Pates with William King, Sr., Dick Tittle, and Wayne Moreland.

John Trautner (1876-1953), born in Winona, Minnesota, borrowed $50 as a young man from an uncle in order to build his first boat. Together with partner Charles Gardiner, Trautner & Gardiner, Manufacturers of Gasoline Engines and Launches operated in Winona until late November, 1902, when Gardiner sold his share in the business to a local party. Records show that Gardiner sold his half interest in the business to a local Red Wing entrepreneur for less than $1,500 and Trautner moved the operation to Red Wing, Minnesota. Gardner helped load the boats and equipment on rail cars for shipment before winter set in. The Daily Republican Eagle reported in a Sept., 1953 story on the Trautners: “In 1902 Red Wing businessmen, eager to locate new industry here, induced Mr. Trautner to move his small factory up river. There wasn’t a lot of machinery then, but Red Wing moved it for him free of charge.”

In 1903 Trautner organized the Red Wing Boat Manufacturing Co. with R.H. Boxrud, C.E Hjermstad, and J.M. Hjermstad as partners. The business outgrew the original buildings at 114 Main Street under the old High Bridge on the Mississippi River, and a larger plant was built in 1906 at 1000 Levee Street. A boat ramp was constructed from the building directly into the river. A local business promotional brochure stated:
“It is now one of the best equipped boat, launch, and engine factories in the Northwest, and its gasoline launches are shipped to all parts of the United States, and Canada, to Australia, New Zealand and Japan.”

The Red Wing Boat Manufacturing Company announced ambitious plans to produce a line of racing launches and yachts having a maximum speed of 18 miles per hour.

By 1910, the company had changed its name to the Red Wing Motor Company. In 1913, the manufacture of boats was beginning to be phased out and the firm devoted most of its resources to manufacturing a line of four-cycle marine engines-Red Wing Thorobreds-which became instantly popular throughout the country. Foundries in Lake City, Minneapolis, Minnesota, and LaCrosse, Wisconsin did most of the casting of the various components used in producing the marine engines. The wood sand casting molds and patterns were made by pattern makers at the factory in Red Wing. Some of these molds and patterns are in the authors’ collection.

Two and four-cycle gas or kerosene powered, water-cooled inboard motors called “Red Wing Thorobreds” began to achieve world-wide recognition. Orders came from a long list of distributors in locations such as Philadelphia, New York, Los Angeles, Boston, New Orleans, Seattle, Lake Minnetonka (Minnesota), Norway, New Foundland, Canada, Siam, Nassau, and clients all along the Mississippi River. The 2-cycle were phased out in the late 1920’s and the 4-cycle were manufactured from 1 cylinder, 4-5 HP up to 6 cylinder, 200 HP. Both gas and diesel versions were manufactured. Many motors were used in commercial fishing. Various governmental agencies also purchased motors, including the Canadian Navy, the U.S. Coast Guard, and the Tennessee Valley Authority directly from the factory in Red Wing.

One famous American, author Zane Gray, owned several different boats in various parts of the world powered by Red Wing engines. His 46 foot boat, the Frangitani, made a trip from Auckland, New Zealand to Papeete, Tahiti, a distance of 2,253 miles under its own power and carrying its own fuel. This is still regarded as one of the outstanding pioneer voyages for any comparatively small motor boat. Actor John Barrymore is also known to have owned a Red Wing Thorobred.

During the years 1915 to 1920, many single cylinder, 2-cycle motors were sold to local implement dealers in Kenyon, Wanamingo, and New Ulm to be mounted on grain binders. Records indicate that most of these engines were picked up by horse and wagon. Because of excessive moisture in the fields, the single bull wheel on the binder would slip, so the chain was removed and a motor was added to enable the binder to function properly as it was pulled by the team of horses.

During both world wars, the plant functioned as a contract machine shop. In World War I, the facilities were dedicated to the machining of great quantities of gun carriage parts. During WW II, entire production capacity was turned over to the building of engines for the Coast Guard and the Air Force. One important unit was the manufacture of the lightweight 4-cylinder, 4-cycle engine for lifeboats carried by B29 bombers and dropped by parachute for rescue on land or sea. The well-known 4-cycle Meteor 20 motors were used in these lifeboats.

In 1953, the name of the company was changed to the Red Wing Marine Corporation. The company continued to produce the Red Wing Thorobreds, as well as some products unrelated to the marine engine business such as meat hooks and precision tools.

Ten years after World War II, William King, Sr., who was a principal partner in the Red Wing Marine Corporation, learned that the Belgian Navy wanted some of the large V-12 engines that Kermath Marine of Detroit, Michigan, had produced for use on PT boats. Since Kermath was not interested in setting up a manufacturing production line for less than a dozen units, King successfully brought to Red Wing enough manufacturing process equipment and parts to fulfill the contract. One critical requirement was a 24-hour worthiness test. King had to obtain approval from the City of Red Wing to run a water cooling line from the Mississippi River into the plant for cooling the engines during this long test and a return line back to the river.

The company ventured into the manufacture of houseboats, a product that was new to the market in the fifties. The steel-hulled Casa Cruiser Houseboat, powered by the popular 6-cylinder Meteor 100 or the 6 cylinder Meteor 110 HP engine, was ahead of its time, since houseboats were a novelty and the general public was not ready for them. A number of Casa Cruisers are known to still be in service. The company also became a dealership in 1958 for Mariner boats, Mercury motors, and Owens yachts. The entire operation was closed in 1965.

In 1962, Wayne Moreland bought all remaining Red Wing Thorobred parts and records from William King Sr. He then formed a corporation called Red Wing Engine Parts Co. and moved the business to 710 E. 7th St., Red Wing. Excess inventory, mostly brass parts, cast iron items, and steel crankshafts, was trucked to salvage yards in the Twin Cities. Some of the production machinery was moved and set up in local machine shops. Occasional requests for Red Wing Marine Engines and parts continued to be received and were processed from this location. Several engines were produced and sold to the Chilean Navy during this time.

In 1969, Wayne Moreland sold the corporation to Virgil Mischke and Kenneth and Richard Behrens of Behrens Auto Supply Company, Red Wing. The business was then moved to 211 Main Street, and engines and parts were produced and shipped from this location for ten years. During that time, several diesel engines were built and shipped to the Chilean Navy. The Canadian Navy ordered several exhaust manifolds for the Red Wing D4-45 diesel which powered their seagoing patrol boats. These manifolds were cast by the Lake City Foundry.

In February 2011 Mike Wilson purchased the entire collection from Harry Munson along with the parts inventory and created the Red Wing Marine Museum project.

In the early morning hours of March 4, 1883, a disastrous fire swept through the Diamond and the Red Wing Flour Mills. Its aftershock, with the loss of jobs and capital, brought a swift reaction. The Red Wing Advance stated: “The millers and coopers are out of a job. What greater calamity could happen to a city than the burning up of a large manufacturing establishment? By the burning of the mills, the water supply for fighting fires in the business portion of the city is diminished one half, and by that much of the demand for water works increased.”

Within days, the city council passed a resolution to form a committee to “examine, devise and recommend the best plan for an efficient system of water works for the city. The contract was awarded August 28, 1883, to the Northwestern Water and Gas Supply Company of Minneapolis, for the sum of $80,400.00.

The new water system was turned over to the city on May 20, 1885. The pump house was constructed on Levee Street, measuring forty by fifty-two feet, and divided into a pump room and a boiler room. A brick coal shed adjoined the main building. The plant used steam-powered pump to take water from the Mississippi River, passing through a fourteen-inch cast iron intake pipe to the main pump house. There, the water was sent through two wells. The first used screens to clear the water of large impurities (leaves, small fish) while the second had a sponge barrier to further filter it. The water was then pumped into the street mains and to the main reservoir on Sorin Bluff. This reservoir held around one million gallons in the holding area excavated into a rock bluff, then lined with brick in cement. A series of water mains — nearly seven miles worth — distributed the water throughout the city.

The building was abandoned and used for storage many years ago. In 2011 Mike Wilson leased the building and is, in the process of converting the building into the Red Wing Marine Museum displaying Red Wing Thorobred Motors and CASA Cruiser historic items. 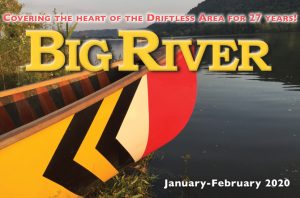 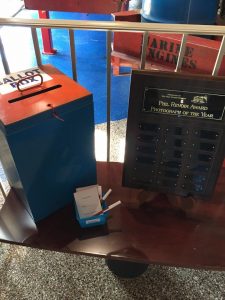 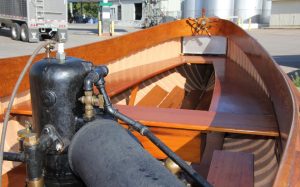 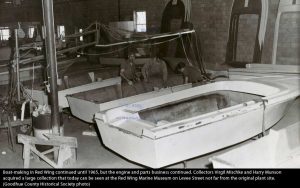